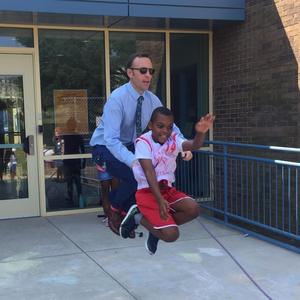 This post, written by Ashley Moser, fourth grade teacher at Inspired Teaching Demonstration School, explores the importance of imaginative play - for all ages.
I have a few heroes in my life who have helped guide and shape the person I am today and who I continually strive to be. Among them is Fred Rogers. Yes, Mr. Rogers of Mr. Rogers’ Neighborhood. Fred Rogers played a crucial role in my early life. I grew up as a latchkey kid and lived on Air Force bases all around the world. My childhood was constantly in flux, so tuning into PBS each day and hearing the question, “Won’t you be my neighbor?” was a comforting consistency.
Years later, as I began my career in education, I revisited the life of Mr. Rogers with adult eyes and found him truly fascinating. His pivotal role in saving public broadcasting serves as an example of how kindness can influence those we view as powerful. However, it was his transformative words that I found most compelling as an adult. Mr. Rogers once said, “Children’s play is not just kids’ stuff. Children’s play is rather the stuff of most future inventions. Think how many people played about going to the moon before that was ever a reality. Let your imagination help you know the truth about your identity.”
Inspired Teaching Demonstration School (ITDS) espouses this sense of play and development as a critical component of our community’s identity. Oftentimes, visitors, new families, and tenets of traditional education take notice of the play that is evident throughout our school and are curious. When asked, I always come back to the above quote by Fred Rogers.
Education is ever evolving. Currently, the education system emphasizes the importance of standardized test results. While accountability is important, I believe something unique to a child’s school experience is at risk of being lost: the sense of play. Traditional schools focus on accountability systems like PARCC and derive their identity from its results. Fortunately, all stakeholders at ITDS characterize our identity as a community focused on the individual. Through progressive ideals such as the practice of intentional play, we continue to exhibit robust, academic progress and a Tier 1 status while fostering a healthy community.
Tomorrow’s Martian explorers, graphic designers, and auto technicians are today’s children. A child who, through fantasy, transformed a cardboard box into a rocketship with Mr. Wong will one day blast off into space. A lead designer for a new ad campaign is now a child experimenting with color in Ms. Dooley’s art class. That mechanic working on your flying car twenty years from now is, at this moment, in Ms. Ingram’s class stacking blocks and crashing cars through them. Through play, students learn the integral, unmeasured, and unassessed skills that standardized tests fail to recognize: fortitude through struggle and failure, cooperation, experimenting with dreams until they become reality, and sharing new skills with others. In essence, learning through intentional play, then, is to be immersed in the 4I’s. This is the reason I am thrilled that the teachers and families at ITDS are my neighbors.
Published September 12, 2018 Print