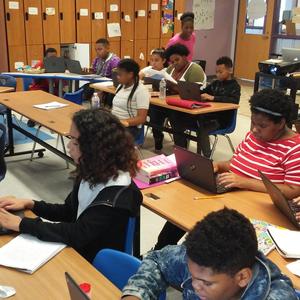 Tamas O’Doughda, middle school English teacher at Inspired Teaching Demonstration Public School, writes about the importance of believing that all students are capable of achieving much more than we may expect.

As the character Roy Batty says at the end of Blade Runner, "I've seen things you people wouldn't believe." He goes on to mention intergalactic marvels, but my personal teacher monologue goes something like this:

I've seen 2 year-olds dribble soccer balls, trap them, make accurate passes to teammates, then shoot and score goals. Albeit, at a snail’s pace, but still. I've seen 3rd graders with rock instruments perform "Eleanor Rigby," and pull it off pretty decently. I've seen high school students make deep observations about William Wordsworth poems that I hadn't even considered myself. I've seen 13 year olds use power tools to create their own pirate ships and program computers to register targets-hit in a marshmallow shoot out.

How is it possible I’ve seen all of these things? Because youngsters are capable.

When working in education, it's natural to ask the question: what is grade and age level appropriate? Can third graders really approach or understand a physics equation? Can seventh graders really master the concept of a musical fifth and resolve? Can 8th graders engage in calculus?

So far in my time at Inspired Teaching Demonstration School (ITDS), I've heard fourth graders answering questions about metacognition. I've seen footage of third graders performing an impressive rendition of Midsummer Night's Dream. I've seen kindergarten students making respectful observations about their classmates to substitute teachers, so that the sub will best know how to treat students they're unfamiliar with.

Students naturally practiced “in media res”, starting with an intriguing, dramatic hook, then winding back the clock to tell the story of how that dramatic peak was led up to.

Students were beginning their stories with "Bring bring!" or "Crash!" or "Meow!", because a sound is always a strong way to create setting, curiosity, and motivation.

Students used cocoon as a verb to write about their character's feelings.

Students described riding in a car as "sailing down a see of asphalt in our ship with wheels."

Students wrote about traveling the world, and appreciating good times while they last, 'cause everything must come to an end, especially when you don't want it to.