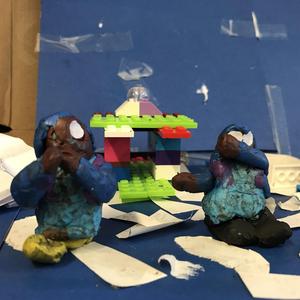 Amanda Fasciano is a middle school teaching resident through the Inspired Teaching Residency Program. New to the classroom this year, Amanda shares what she has already observed from lead teachers and students about engaging projects.
One of the factors that drew me to the Inspired Teaching Residency was the emphasis on inquiry-based and project-based learning. This style of teaching places the ownership of learning on the student and allows for unique processes of learning content. This stood out to me as different from the way I learned in school and the way many children still learn in schools today.
Over the past couple of months, I have had the privilege of seeing students engage with several different projects and I am amazed at how invested the students are in their work. Fifth graders were tasked to create a claymation tourism advertisement for a planet using clay characters and a stop-motion video application on an iPad. It was incredible to see so many students with vastly different interests, likes and dislikes, learning styles, and roles in groups all so interested and invested in the same project. Part of the magic of project-based learning is that it allows students to guide their own inquiry and take their projects in a direction that engages them.
For example, one group of students created Percy from Thomas the Tank engine out of clay as the character to show off their planet; another group created characters modeled after themselves to explore their planet and yet another group created a taco truck for tourists on their planet to visit. Each group took the project in a unique direction that was interesting to their group and the results were truly impressive. Not only were students dedicated to their own projects, but they were excited about and supportive of their classmates’ projects as well. While they were working on their projects, I saw students who don’t necessarily interact every day excited about each other’s projects and heard them asking genuine and insightful questions. One student inquired every day, at the start of class, about when his class would be able to watch everyone else’s videos.
As we finished up our projects for trimester one and look ahead to trimester two, I am overjoyed to be able to witness project-based learning at its finest. I look forward to continuing to see our students thrive and forge their own separate but intertwined paths of engagement and learning.